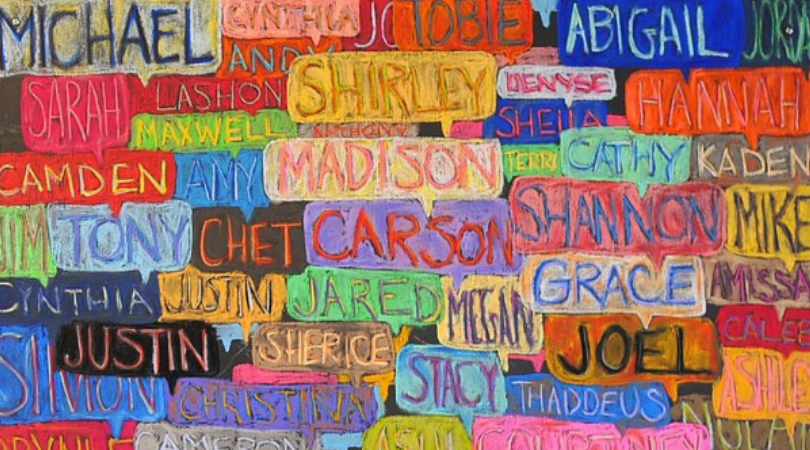 It seems super fun, but then all of a sudden you’ve worked out 14 different horrible nicknames for every single name in the baby book that you and your partner agree on.

Or you realize that the girl name you like and the middle name you’ve had picked out since birth would make for a rather unfortunate L.L. Bean monogrammed backpack.

And then half of your friends are pregnant and you wake up in cold sweats worried that one of them decided to use “your” boy name. So it starts to get less super fun.

What’s In a Name?

But it all works out because ultimately you end up with a name you love and you couldn’t imagine your child being anyone different.

While other names made appearances at the top of our lists, we always came back to Jack and Norah. Just felt right. There are also some pretty strong family vibes. Jack is loosely named after his great grandfather and Norah is an anagram of my maiden name. She and I share a middle name with my mom. I adore their names and I wouldn’t change them for a second.

Unless Glen and I change our last name to Sullivan. Then one of them is getting renamed “Herkimer.”

You My Boy, Sully!

Like most stories from my childhood, I didn’t start questioning how much sense this idea did or did not make until way later in life. And to be honest, I still don’t think it’s the worst idea I’ve ever had.

My brother played baseball when we were kids and there was a boy on his team with the last name Sullivan. Everyone called him Sully. Which made a lot of sense because we lived in the Boston suburbs and if we didn’t have a family with the last name Sullivan in town whose kids were known as “Sully” it would have been real weird. I always enjoyed a good nickname and I thought this was the best nickname in the history of nicknames. I still do actually.

A Sully would stand up for kids on the playground. A Sully would know how to change his own oil. A Sully would give you a real firm handshake. A Sully is a stand up guy. And I would be so intimidated by a girl who could pull off the nickname Sully that I wouldn’t be able to talk to her but I would absolutely follow her on Instagram.

So I always thought that maybe someday I would marry someone with the last name Sullivan and one of my kids could be “Sully.” But friends would say, “Becca, Sully is a nickname. How would guarantee that he would actually be called Sully and not his real name? Also, you’re an odd person and our friendship is confusing.”

I had a perfectly reasonable response to this. I would give my child a horrible first name that he wouldn’t want to use and thereby kind of shame him into using the nickname that I chose. This is why 13 year old kids shouldn’t be parents. Well, that and many many other reasons.

My math teacher at the time used the name “Herkimer” a lot when trying to explain math concepts to us. I don’t know why. But apparently Herkimer is also a town in upstate New York. In any case, I thought that would be a good choice. No kid is going to want to be called Herkimer. So my kid would be Herkimer “Sully” Sullivan. It was going to be perfect. For me. Maybe not for him. We’d have to see.

Sully, Where Art Thou?

But alas, Glen’s last name is not Sullivan. And despite that I fell in love with him and agreed to marriage. Then he didn’t want to change his last name to this arbitrary name that was not in any way connected to either of us. So typical…

I guess I could have named one of my kids Sullivan as their first name. But it didn’t go with our also quite Irish last name. So Herkimer Sullivan never came to be. Most days I’m fine with it. Other times I think that maybe one day we will have a dog named Herkimer Sullivan. And then every once in a while I do a quick Google search to see if anyone took my idea.

If the name you like for your unborn child is on the Top 100 list, you are in very good company and I hope our kids don’t end up like Bachelor contestants forever known by their first name last initial. If your preferred names are not on the list, you are super creative and I applaud you. If you have no intention of naming a child right now but still read these lists every time they are published because you find them fascinating, then maybe we should hang out.

A Rose By Any Other Name

I have at least two more name origin stories that will probably grace the pages of this blog at some point. And another one that already has. Those of you who know me in real life already know those stories by heart because they are my go tos after three glasses of Pinot. But for my new friends, come back for those stories, and maybe drink a couple glasses of wine first. I’m funnier when someone is drinking wine.

Read more stories from the archives:

I’ve Got the Music in Me: The Making of a Piano Prodigy

The Reason I’ll Never Be a Knee Model